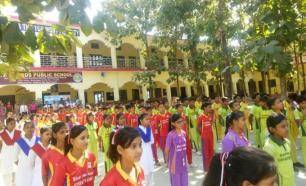 The Republic Day of India commemorates the date on which the Constitution of India came into force replacing the Government of India Act 1935 as the governing document of India on 26 January 1950.[1]The 26th of January was chosen to honour the memory of the declaration of independence of 1930. It is one of the three national holidays in India. While the main parade takes place in the national capital New Delhi at the Rajpath before the president, the anniversary is also celebrated with varying degrees of formality in state capitals and other centres.Although India obtained its independence on 15 August 1947, it did not yet have a permanent constitution; instead, its laws were based on the modified colonial Government of India Act 1935, and the country was a Dominion, with George VI as head of state and Earl Mountbatten as Governor General. On 28 August 1947, the Drafting Committee was appointed to draft a permanent constitution, with Bhimrao Ramji Ambedkar as chairman. While India's Independence Day celebrates its freedom from British Rule, the Republic Day celebrates the coming into force of its constitution.